by Nicholas Papador and the University of Windsor Percussion Ensemble 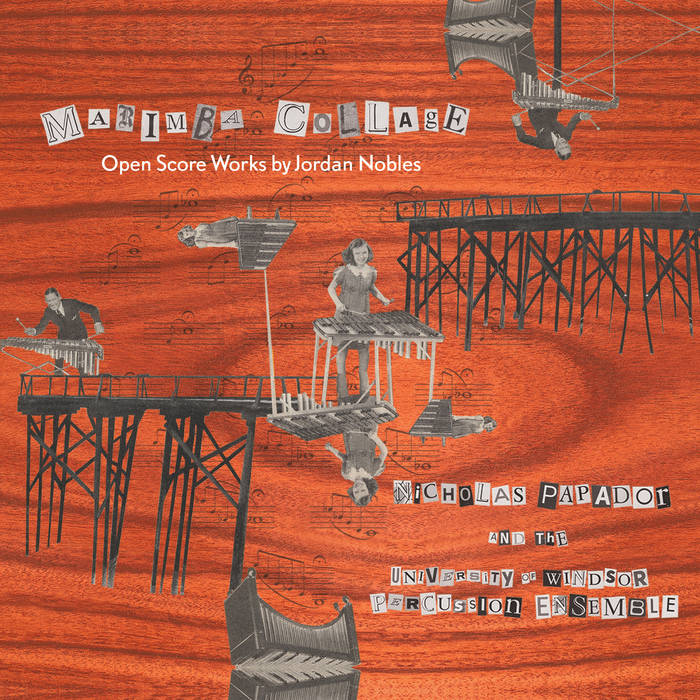 The music of Jordan Nobles has had a significant impact on performance studies at the University of Windsor since the composer’s residency at the 2010 Windsor Canadian Music Festival where student ensembles premiered and performed a number of Nobles’ chamber pieces.

In the following years, Nobles’ Open Score works have been regularly programmed in concerts as well as in improvisation exercises at the University of Windsor School of Creative Arts.

During the COVID-19 pandemic, I was looking for ways to enrich Windsor’s percussion community and felt it was time to create recorded realizations of Nobles’ Open Score works for marimbas. The multitracked recording format allowed the group to create large sonic landscapes that wouldn’t be easy to capture in a live setting. This also allowed the performers to record safely in distanced individual sessions. The marimba is a warm sounding percussion instrument whose large size and stereo profile have a pronounced spatial effect in a recorded medium. The timbre of the instrument, with its rich low tones, water-like high register, and sustained tremolo seemed an ideal vehicle for these work’s improvisatory, meditative, and ambient qualities.

All performance and production stages of the project were completed by students, alumni, and faculty of the University of Windsor School of Creative Arts (SoCA) with the goal of strengthening community and professional exposure for emerging artists in the program. SoCA alumni, Cody Weldon and Lilly Korkontzelos adeptly handled the production, tracking, mixing, and mastering of this recording. In addition to my arrangements and performances, members from the University of Windsor Percussion Ensemble from 2005–2021 added their own performances to compositions on the album. To top things off, SoCA Visual Arts faculty Catherine Heard created the beautiful cover collage.

Jordan Nobles’ Open Score Works are indeterminate in nature in that they can often be performed by any number of performers on a flexible combination of instruments. Each work has criteria set by the composer that makes every performance unique, but also consistent in sound and mood between different realizations. Works like Rosetta Stone, Still Life, and Nocturne have a scripted order of pitches, rhythms, or duration but can be played by different instruments. Works like Stasis, æther, Ostinati, Foreign Lands, Spin and Grace, provide specific pitch cells and gestures, but they can be played in any order for any duration of time. The performances allow the players to curate a collage of sound based upon Nobles’ given materials. Quickening, Möbius, and on a mote of dust suspended in a sunbeam have pitch/gesture instructions based upon specified time frame durations. Kinetics has fixed instrumentation and pitches, but the ‘bouncing ball’ gestures specified affect both the work’s duration and vertical harmony.

The open score works of Jordan Nobles unify a number of conceptual and sonic elements within contemporary music practices. They are a joy to perform and it has been a pleasure to undertake this project alongside these talented young artists.
Dr. Nicholas Papador