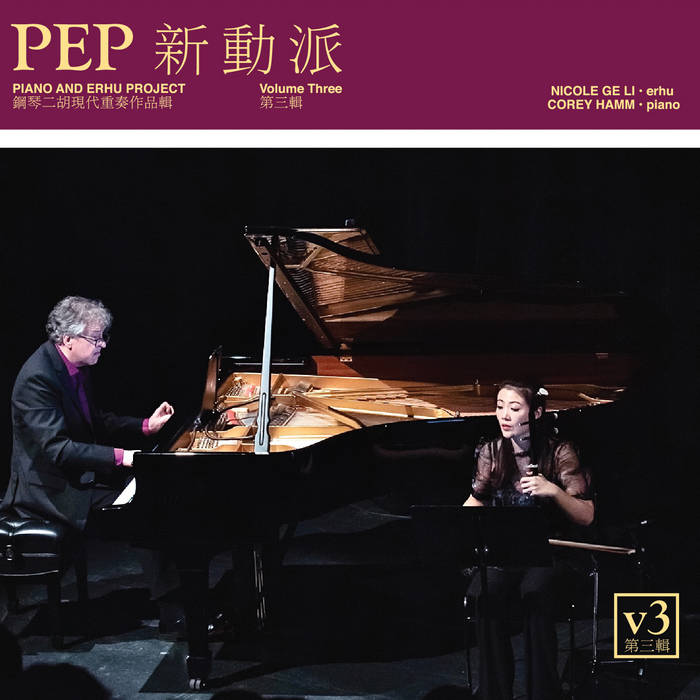 Erhu and piano virtuosos Nicole Ge Li and Corey Hamm began PEP (Piano and Erhu Project) in 2011 to explore the fascinating blend of these two iconic Eastern and Western instruments. The blend is not only a tonal and musical one, but also cultural, and PEP is delighted to see composers deal with these elements in such different ways

PEP has had over seventy composers write it works since it began. These include such composers as Michael Finnissy, Gao Ping, Si Ang Chen, Terri Hron, Serra Hwang, Roydon Tse, Brian Cherney, Keith Hamel, Dorothy Chang, Stephen Chatman, Chan Ka Nin, Alice Ping Yee Ho, Hope Lee, Jordan Nobles, Jocelyn Morlock, Scott Godin, Remy Siu, Edward Top, Aaron Gervais, Jared Miller, and dozens more. The result is a new and flourishing catalogue of works for piano and erhu composed in the musical languages of the 21st century. This combination of instruments bringing together two of the world’s great musical traditions, now has a unique collection of works for Nicole Ge Li and Corey Hamm to draw from for audiences of the 21st century. PEP CDs Volumes 1, 2, and 3 have been released with critical acclaim on Redshift Records, and
Volumes 4 and 5 will soon be on the way. PEP CD Vol. 2 was nominated for Best Classical Recording at the 2016 WCMA. Dorothy Chang wrote Gateways for PEP, the world’s first double concerto for erhu and piano soloists and orchestra, which PEP premiered with the Vancouver Symphony Orchestra and Philharmonia Northwest in Seattle. PEP has toured China, Canada, and the USA and has been featured at SICPP, ISCM, Classical:NEXT, New Music Concerts, Modulus Festival, Sonic Boom Festival, Sound of Dragon Festival, Odyssey Chamber Music Series, and Music on Main Series. PEP is an Ensemble-In-Residence at the University of British Columbia School of Music.