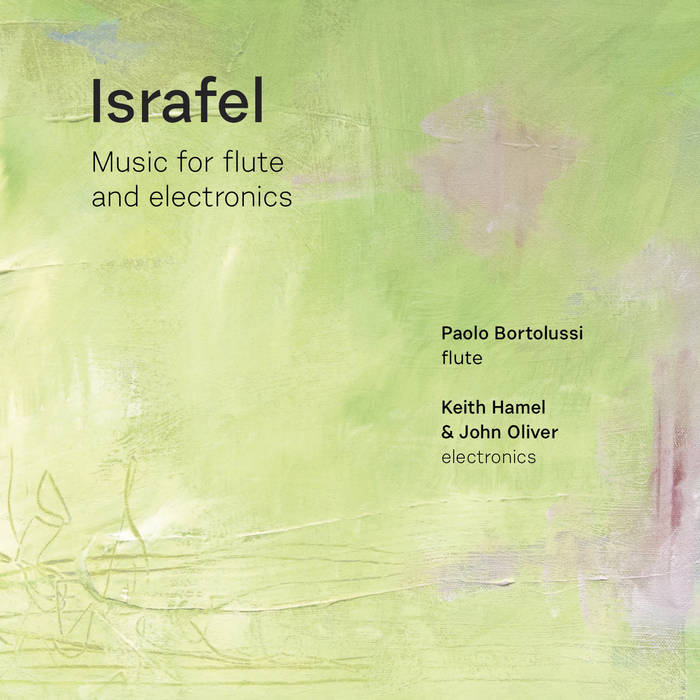 A note about the CD
The four works on this recording highlight some of the incredible developments that have taken place in the electronic music world. But perhaps more importantly, these are all powerful, romantic, lyrical, beautiful pieces that take full advantage of the technology available at the time. In many ways this album is as autobiographical as it is historical: each piece came to me at a different time in my life, and each has changed me as a musician and artist. So it hardly needs saying how wonderful it is to be able to share such deeply personal music.

I was a young undergraduate flute student at the University of Ottawa when I first heard Larry Lake’s Israfel — my teacher, Robert Cram, was preparing it for performance. It was my first exposure to the idea of performing with electronic sounds, and I remember standing outside Robert’s studio door waiting for my lesson to begin, not wanting to interrupt him, fascinated by what I was hearing. I performed Israfel later that year and have felt strongly connected to it ever since. I spoke with Larry Lake several times while preparing Israfel – sadly he passed away in 2013 and never heard this final recording. But I’m grateful to Larry for his gracious and enthusiastic input, and to Robert Cram for opening my eyes to the importance of music as a living, evolving art form.

In 2010 I presented my lecture recital at Indiana University, where my doctoral degree dealt with the performance of flute music with interactive and non-interactive electronics. I performed Lake’s work again, along with two other works, Krishna’s Flute by Keith Hamel and NoaNoa by Kaija Saariaho, which together presented a kind of spectrum of interactivity between the performer and the electronic media. NoaNoa and Krishna’s Flute present similar approaches to performer/computer interaction, but they differ in the execution of the interaction. In NoaNoa, there are 63 electronic events that are triggered by means of a pedal controlled by the performer. Written more than a decade later, Krishna’s Flute also has a series of sampled sounds, voices, and live sound processing. The main difference is that in Krishna’s Flute, it is the computer that tracks the music in real time, with the electronic events triggered automatically — a new level of freedom for the performer, and a significant step forward from the rigidity of Israfel’s tape playback. – Paolo Bortolussi (2015)

Israfel – Music for Flute and Electronics was made possible through a Kwantlen Polytechnic University Professional Development grant.
TK443 © 2016 Redshift Music