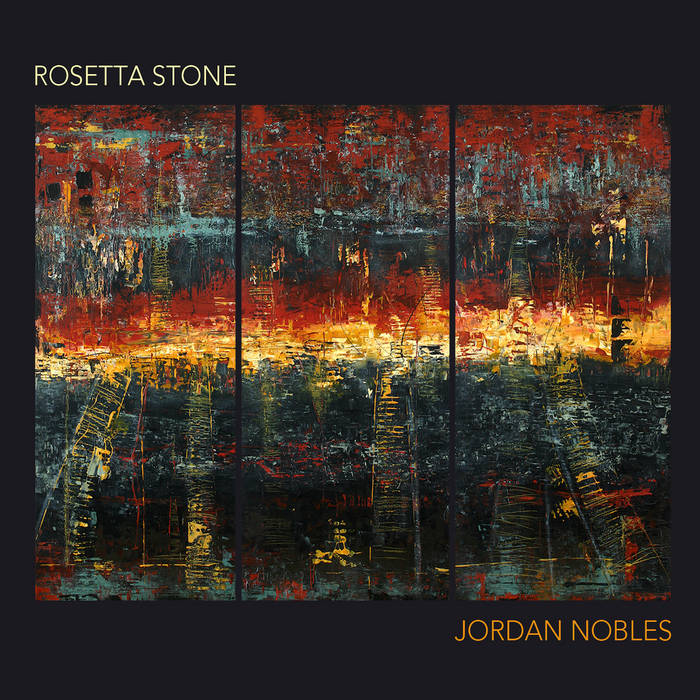 Rosetta Stone: Music for multiples.
The idea of “multiples” — musical works composed for several identical or like-sounding instruments — has been a decades-long preoccupation of the composer Jordan Nobles. Whether it’s eight saxophones, six harps, or twenty-four vibraphones, the monochromatic ensemble presents a creative restriction that is capable of surprisingly dynamic and varied results. Taking his penchant for minimalism even further, Nobles opted to have each work on this album performed by a single musician, via multitrack recording. This has allowed him to create works that, for practical reasons, would be difficult to perform “live" (like möbius, for ten grand pianos, or air, for sixteen bass flutes), while at the same time reinforce the chromatic uniformity of each piece to an almost hyperreal level.

The works on this album span two decades and showcase a diversity of approaches to the multiples genre. Quaver, the earliest work here, utilizes rhythmic cells that phase in and out of each other; Nobles’ mallet percussion pieces, crystalline and still life, and his work for harps, typhoon, are engagingly atmospheric; air exploits alternate performance techniques to create an entirely fresh and dramatic sound world; möbius, arguably the most Cage-inspired work here, loops one-minute “strips” of music, offering glimpses at a harmony that is never heard in full; ephemera and rosetta stone are fastidiously precise, with the various musical lines interlocked by way of a rhythmic technique called hocketing; and æther reveals another great passion of Nobles: that final frontier, space, its otherworldly splendour and strangeness eerily captured by the layering of multiple wordless voices. Mark Takeshi McGregor April, 2018

This recording was supported by Creative BC and the Province of British Columbia.

Composer Jordan Nobles is known for creating music filled with an “unearthly beauty” (Mondomagazine) that makes listeners want to “close (their) eyes and transcend into a cloud of music” (Discorder Magazine). He has won numerous awards for his work including a JUNO Award and a Western Canadian Music Award for ‘Classical Composition of the Year’. Jordan was also the recipient of the Jan V. Matejcek Award in recognition of ‘overall success in New Classical Music’ and was awarded the Barbara Pentland Award of Excellence ‘for his extraordinary contribution to Canadian Music’. He lives in Deep Cove, BC with his wife Kelly and their son Julian.
www.jordannobles.com
redshiftrecords.org/releases/tk461/